From around the 1890s, in the rich basin of the Jinzugawa River, unusual damage to crops began to occur, such as poor growth of rice. Soon from about 1912, a disease of unknown causes was beginning to occur, one that caused extreme pain throughout the whole body. Local residents feared this disease, which they considered “the strange disease” that could never be cured once affected.

The agricultural and fishery damage that began in the 1890s in the Jinzugawa River basin areas gradually came to be reported by newspapers as to be a result of the mineral poison from Kamioka Mine. On the other hand, while Itai-itai Disease was often observed in this basin from about the 1910s, it was considered by some people as a localized disease or an "incurable disease", and until the 1950s many prefectural residents did not even know of its existence.
Incurable diseases: diseases considered to be contracted as punishment for evil deeds.

In the 1910s, agriculture organizations in the basin of the Jinzugawa River complained about mine pollution damage, such as the inferior and incomplete development of rice due to the impact of mineral poison flowing out from Kamioka Mine to the Takaharagawa River upstream of the Jinzugawa River. The organizations sought improvements to the wastewater treatment of Kamioka Mine.

Moreover, from around 1930, fishery organizations also made similar proposals to Kamioka Mine. Such demands began to develop into compensation claims after the war.

Together with damage to agriculture and fisheries in the basin of the Jinzugawa River, health problems of people living in the region were gradually spreading.

The illness that came to be known as “Itai-itai Disease” occurred mainly in the region between the Jinzugawa River and Fuchu Town, Toyama City (formerly Fuchu Town, Nei District) in the basin of the main Jinzugawa River current system, and the opposite shore. The victims were mostly women aged 35 or over who had been living for many years in this basin.

This strange disease in the Jinzugawa River basin became known as "Itai-itai Disease" from a newspaper report in 1955. This naming was reportedly brought about from the fact that victims were crying out "Itai itai" because of its intolerable pain.

Itai-itai Disease starts from pain of the lower back, shoulder and knees. When symptoms become more serious, bone fractures repeatedly occur until the victim is unable to move, and finally they are confined to bed with pain attacking the whole body. What is especially terrible is the fact that they continue to suffer from pain with full consciousness, crying out "Itai itai (Ouch Ouch)" from bed, until they cannot take meals and waste away to face death at last.

[Primary areas affected]
Fuchumachi of Toyama City (previously Fuchumachi of Nei District) and its surrounding area in the Jinzugawa River basin
[Gender]
overwhelmingly more frequent in women
[Age]
from 35 years old to about menopause age, especially among those who had experienced childbirth 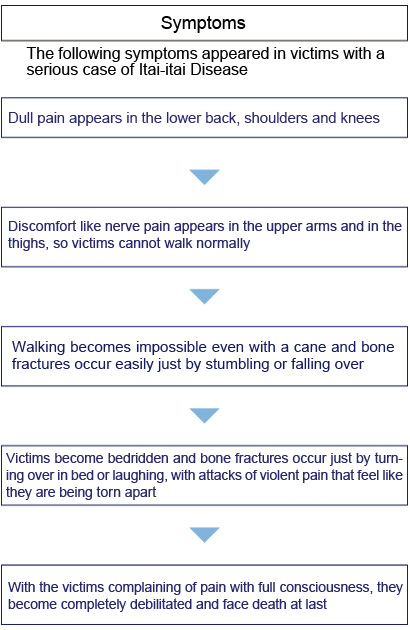